Monsanto / Bayer and the GMO Poisoning of our Planet 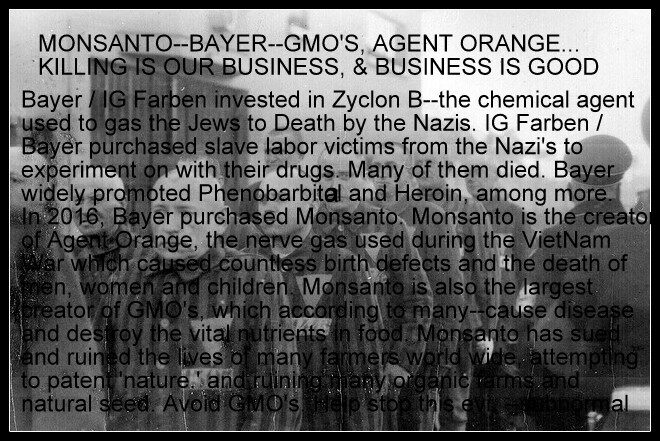 The company Bayer (which made big money off of the nerve gas Nazi’s used to gas the Jews to death in the ovens with) has now bought Monsanto. Monsanto as you should know, is another Big Pharma company, and also  war profiteers who made Agent Orange, which killed countless babies, men and women during the VietNam War, and caused untold birth defects.

Monsanto is one of the two main companies behind GMO’s (genetically modified organisms) with which they have covertly poisoned much of the world’s food–seed supply–which is proven to cause disease and strip food from its natural nutrients, among more.  Monsanto has attempted to trademark nature, and has sued countless farmers that will not pay their shakedown money demand. Bayer and Monsanto–with a nearly trillion dollar company, have ruined the lives of countless farmers, and murdered untold more.

The Food and Drug Administration, which has a reputation for attacking organic, herbal foods and even such things as raw milk, either directly or indirectly supports GMO’s.  As proof, California, the alleged most ‘green’ and alleged most ‘healthy’ conscious state in the nation, has had untold hundreds of thousands fight to demand GMO labeling, a simple request for consumers to KNOW if food they are considering buying has GMO’s  in them or not, yet the FDA and Governor Jerry Brown reportedly has refused to allow the free education of California consumers to know what foods contain GMO’s, and which do not.

Not only are GMO’s the problem however. As The Los Angeles Times reported several years ago, many food ingredients that are labeled as ‘natural ingredients’ are far from what any normal person would consider ‘natural,’ and may include anything from animal or human hair to insect feces. The fact that we–in the modern age of 2016 in America STILL have not gained the ability to have the open knowledge of WHAT we are buying and WHAT we are putting in to our bodies, speaks volume as to the level of tyrannical, deadly

control that the U.S. government and the Nazi associated food poisoners have enacted upon us– a duped, and suffering public that they pummel with lies, misinformation, or simply NO information–when in fact, our very health and long term survival DEMANDS it.
The FDA states, “FDA encourages manufacturers to use labeling claims that state that a food product (or its ingredients, as appropriate) was not developed using bioengineering, genetic engineering, or modern biotechnology…” Therefore, they claim they
encourage it, yet do NOT ‘require’ labeling of GMO ingredients.
I urge you to contact the FDA and DEMAND a new revamping of food labeling nationwide in the U.S. which includes labeling IF a food or drink product contains GMO, and furthermore, a FULL and TRANSPARENT labeling of actually WHAT are in the so called NATURAL and ARTIFICIAL ingredients. The fact that an entire class of ingredients are missing for us to know about–under the guise of ‘natural’ or ‘artificial’ is unacceptable, and the fact that GMO’s are proven disease causers and we are NOT being told of their existence in food products we buy–is not only unacceptable– it is covert murder.   We must STOP being victims, and we must DO something about the abuses of the chemical killers of Monsanto and others.
Contact:
U.S. Food and Drug Administration
10903 New Hampshire Avenue
Silver Spring, MD 20993
1-888-INFO-FDA (1-888-463-6332)

Propaganda is the new mainstream. And at least half of the planet are their ministers of disinformation. By Duncan.Hull - Own work, CC BY-SA 4.0, wikicommons. The communists are scared that freedom...