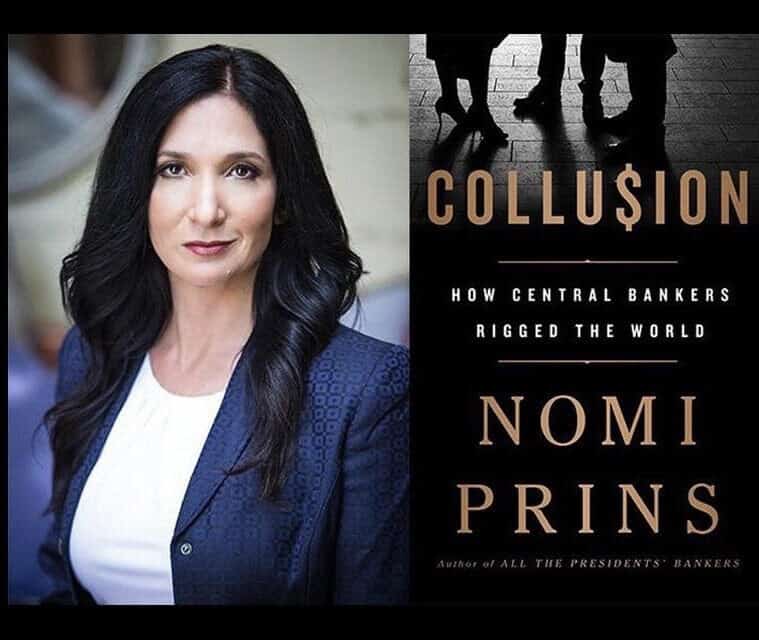 Her former book; All the Presidents’ Bankers, is a groundbreaking narrative about the relationships of presidents to key bankers over the past century, and how they have impacted domestic and foreign policy. Her other books include Black Tuesday; a historical novel about the 1929 Stock Market Crash, and the hard-hitting expose It Takes a Pillage: Behind the Bonuses, Bailouts, and Backroom Deals from Washington to Wall Street. She is also the author of Other People’s Money: The Corporate Mugging of America, chosen as a Best Book of 2004 by The Economist, Barron’s and Library Journal.

Nomi has appeared on numerous television programs internationally for BBC and RtTV, and nationally for CNN, CNBC, MSNBC, CSPAN, Democracy Now, Fox, and PBS.  She has been featured on hundreds of radio shows globally including for CNNRadio, Marketplace, NPR, BBC, and Canadian Programming.

Appearing in numerous documentaries, her writings have also been featured in The New York Times, Forbes, Fortune, Newsday, Mother Jones, Truthdig, The Guardian, The Nation, NY Daily News, and LaVanguardia, among more.

Nomi was a member of Senator Bernie Sanders (I-VT) Federal Reserve Reform Advisory Council, and is listed as one of America’s TopWonks. She is on the advisory board of the whistle-blowing group ExposeFacts, and a board member of animal welfare and wildlife conservation group, the Elephant Project.

Nomi received her BS in Math from SUNY Purchase, and MS in Statistics from New York University, where she completed coursework for a PhD in Statistics.

Prior to becoming a journalist, Nomi worked on Wall Street as a managing director at Goldman Sachs, ran the international analytics group as a senior managing director at Bear Stearns in London, and worked as a strategist at Lehman Brothers and analyst at the Chase Manhattan Bank.

Hollywood Sentinel and subnormal magazine are very pleased to bring you here our exclusive interview with Nomi Prins.

Listen to Part 2 of our Exclusive Interview with Nomi Prins here below:

Visit Nomi Prins Official Website below, and order her latest book through her site here:  http://www.nomiprins.com/

The above content is ©2018 Hollywood Sentinel, all world rights reserved.

Psychiatric Industry: A Weapon of War

We first heard of Cumgirl8 as listed in the Substance Music Festival of 2022 we were kindly guest listed for, with headlining bands Jesus and Mary Chain, The Chameleons, and many more. ...

Some people die with their dreams still in them. Rachel Amodeo worked her whole life, no matter what the cost-to follow hers. Today, the world is noticing, as the genius of a...

Punk Rock legend Bloody Mess gives us here an exclusive interview discussing some of the highlights of his life as a rock and roll wild child. I first read about singer Bloody...